While many in Winchester were enjoying firework displays on 2nd November 2013, 33 young people from the city were in Belgium paying their respects to the fallen of World War 1. 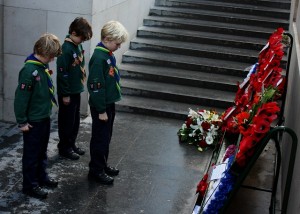 Cub scouts as young as 8 years old travelled by coach and ferry to visit the Menin Gate in Ypres, a memorial to British and commonwealth soldiers who fell with no grave.

Throughout the year at 8 pm every day, members of the Last Post Association hold a brief ceremony at the monument which includes the last post and a minutes silence. On Saturday 2nd November the Cubs and Scouts from the 1st Winchester Scout Group in Weeke were joined by cubs from Compton and Winnall to form a key part of the ceremony. They paraded their flags and formed an unofficial guard of honour for those laying wreaths.

A wreath was laid by three Cub Scouts on behalf of “The Cubs and Scouts of Winchester”.

Assistant District Commissioner for Cub Scouts, Steve Feeney, said he was very proud of the young people who showed such dignity and respect.

Group Scout Leader, Bruce Martin, thanked all leaders and adults who made this event possible particularly Colin Choules who organised it all.

Members of the Last Post Association shook hands with the wreath party and thanked them for making the journey.

Many members of the public commented on the impact that the young people had made on the ceremony. One veteran said he was very grateful that today’s youth can still find the time to remember the sacrifices made almost a hundred years ago.